The MONKEYPOX and other “Pox” Diseases

As the world grows weary of battling SARS-CoV-2 and its ever-emerging variants, another virus has recently popped up out of nowhere. Since the first confirmed monkeypox case appeared in mid-May, the culprit has caused outbreaks in many countries in Europe and North America. As of June 30, there were 5,323 confirmed cases in over 50 countries, with the United Kingdom leading the way (1,076), according to the US Centers for Disease Control and Prevention (CDC).1 In the United States, 396 confirmed cases had been reported in 30 states and the District of Columbia.2 You have probably heard of smallpox and chickenpox, and now monkeypox. They are all called “pox”, which means they are associated with skin rashes. But are they related, and do they have the same etiology?

Firstly, smallpox, chickenpox, and monkeypox are all contagious viral diseases with similar clinical manifestations. The viruses involved are all double-stranded DNA viruses, but they differ in terms of transmission, infectivity, and fatality. The monkeypox virus (MPXV) is more closely related to the smallpox virus (variola virus, VARA); both belong to the family Poxviridae. Chickenpox, however, is caused by the varicella-zoster virus (VZV), a member of the family Herpesviridae.

Chickenpox is a prevalent infectious disease and is highly contagious, where the primary way of transmission is human-to-human through respiratory droplets. It occurs predominantly in preschool children, but many people do not get chickenpox until adulthood. Chickenpox is generally a mild disease and rarely fatal, however, it is more severe in adults and those with weak or suppressed immune systems. Chickenpox can be prevented by vaccination, and routine immunization of children is recommended in many countries. Since the introduction of the vaccine in the United States, the number of cases has dropped dramatically.

The word “smallpox” may sound like a thing of the past for the younger generations, but it used to be a deadly disease for centuries in human history, with a case fatality rate of ~ 30%, leaving survivors with horrible scars. It is highly contagious, spreading through respiratory droplets and contact with contaminated surfaces (such as clothing or bed linens of the infected.) The earliest written record of smallpox-like symptoms can be found in “The Handbook of Prescriptions for Emergencies”, written by Ge Hong, a Taoist theorist, renowned alchemist, and physician in the Eastern Jin Dynasty (~ 4th Century AD) of China. Still, the smallpox virus likely existed as early as > 3,000 years ago.3 Smallpox played a critical role in the development of vaccination, as it was the target of the first-ever vaccine. It was the success of the vaccine and the global effort, coupled with the fact that smallpox was transmitted from person to person and had no other animal hosts, that made it the first and the only human infectious disease being eradicated.

Compared to smallpox, monkeypox is usually associated with mild symptoms and has a lower case fatality rate (1-10%).4 People recovering from the disease may have some scars. Monkeypox is a zoonotic infectious disease that can occur in both humans and some other animals, first identified in 1958 among laboratory monkeys shipped from Singapore to Copenhagen. Then, the disease showed up mainly in monkeys and other primates for the next decade or so.5 The earliest human cases were reported in 1970 from the Democratic Republic of the Congo, Liberia, and Sierra Leone.5 Monkeypox has always been considered a sporadic and self-limiting disease that generally occurs in Central and West Africa, but growing numbers have been noticed in recent years and appeared in other areas around the world, especially in the past two months.4 The monkeypox virus (MPXV) can be transmitted from animal to human and human to human. Though not as contagious as the smallpox virus (VARA), MPXV can be spread through respiratory droplets or close contact with infected bodily fluids. Data from the current monkeypox outbreak showed that a majority of cases have been in men having sex with men, but more research and epidemiological data are needed to support or explain this pattern. 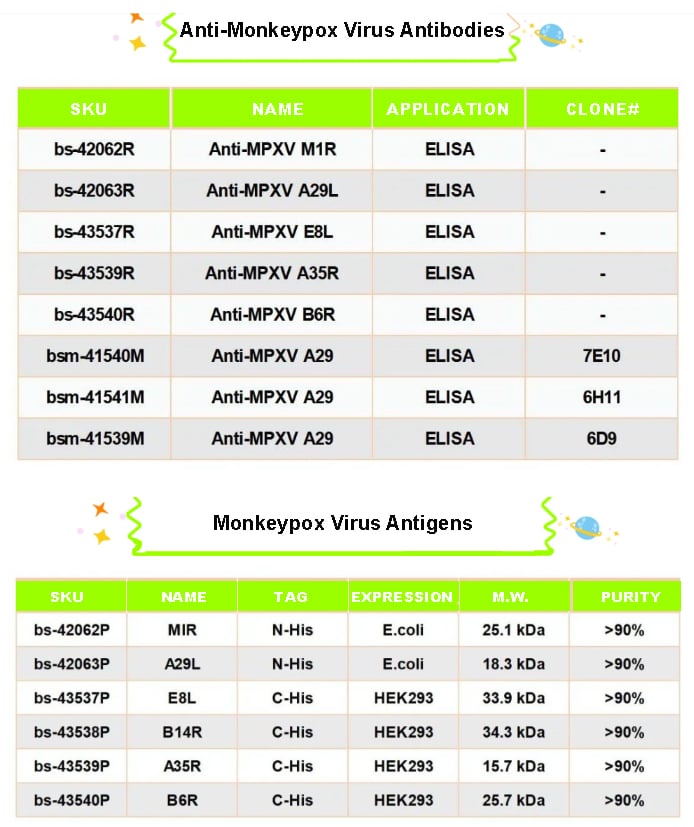 As mentioned earlier, MPXV and VARA belong to the same Poxviridae family as well as the same Orthopoxvirus genus, also sharing some common antigens. Cross-reactivity between MPXV and VARA has been observed with immunofluorescent-labeled MPXV and VARA antibodies.5 Therefore, the smallpox vaccine can provide protection against monkeypox, but the chickenpox vaccine cannot. According to the CDC, there are currently two licensed vaccines in the United States to prevent smallpox, ACAM200 and JYNNEOSTM (also known as Imvamune or Imvanex). Past data from Africa suggests that the smallpox vaccine is at least 85% effective in preventing monkeypox.6 We should be thankful that there are effective vaccines at hand, but this raises another interesting question that many epidemiologists and virologists have been concerned about, i.e., whether the emerging monkeypox incidence is correlated to the elimination of smallpox and the cessation of the smallpox vaccination (Note: In 1980, the World Health Organization declared smallpox eradicated, and routine smallpox vaccination was no longer performed on the public after that.)

Finally, it's worth mentioning that skin rashes can be caused by factors other than viral infections, such as bacterial or fungal infections or allergic reactions. Syphilis (a.k.a. the great pox), for instance, is a sexually transmitted infection caused by Treponema pallidum, a spiral-shaped bacterium. It is important to reach out to a doctor or a medical provider to check out any such symptoms before making a self-diagnosis.