The production of monoclonal antibodies dates back to 1975 when Köhler and Milstein first described the fusion of immunized mouse spleen B cells with cancerous myeloma cells, resulting in hybridoma cells that are both immortal and secrete a specific antibody of interest. Despite the reproducibility and specificity that mouse monoclonal antibodies deliver, they have limited sensitivity and are susceptible to antigen heterogeneity and experimental condition changes.

Rabbit monoclonal antibodies have emerged in recent years as a crucial subset of the research antibody market. Spurred by early successes as in vitro diagnostics — in addition to ongoing trials for therapeutic applications — rabbit monoclonal antibodies are increasingly being used for research in the life sciences as well. Scientists recognize the unique qualities these antibodies hold, such as broader reactivity with commonly studied animal tissue and a stronger, more diverse immune response when compared to mouse-derived antibodies.

While the breadth and depth of products have not yet matched traditional mouse monoclonal antibody catalogs, the scientific community's demand for more accurate, reliable reagents ensures the continued expansion of this market.

Scientists have utilized rabbits alongside mice, goats, and other animals for many decades. However, rabbits retain unique traits that make them ideal for monoclonal antibody production.

1) Antibody repertoire refers to the complete set of antibodies produced. In most species, the majority of the primary antibody repertoire is generated by rearrangement of the V, D and J gene segments of Immunoglobulin (IgG) genes within developing lymphocytes. The resulting VDJ combinations can be further varied via somatic diversification, which leads to the development of the secondary antibody repertoire. Rabbits, on the other hand, are unusual, especially among mammals in their ontogeny and genetic makeup facilitates antibody diversity. Although the rabbit IgG Heavy Chain locus has more than fifty functional V gene segments, predominately only one is rearranged. Therefore, much of the antibody diversity is generated by somatic gene conversions and hypermutation mechanisms. This unexpected trait enables rabbits to elicit a robust response, even to low immunogenic compounds.

2) The generation of monoclonal antibodies is predicated on the recovery of B cells from spleen, bone marrow or blood. Therefore, rabbit’s anatomical difference, compared to mice and rats, is advantageous because these cells are present in higher quantities.

3) Rabbits display a naturally heightened immune response when compared to other laboratory species. In fact, the rabbit immune system is sensitive enough to elicit robust responses to small molecules, such as molecule drugs, steroid hormones, lipids, and glycolipids, as well as many natural and synthetic antigens without the assistance of carrier proteins such as KLH, reducing the likelihood of cross-reactivity with non-targeted peptide sequences.

4) In contrast with mice and rats, rabbit laboratory strains are outbred, which is advantageous because inbreeding decreases the diversity of immune responses and the overall sensitivity of the antibodies produced.

5) The increased evolutionary distance between rabbits and humans, when compared to the relatedness of mice and rats to humans, allows for rabbits to be uniquely immunogenic to certain antigen epitopes which rodents are not. This means that rabbit’s total pool of specific antibodies is larger and more diverse. This broader range of epitopes is also highlighted by the reduced level of immunodominace displayed by rabbit monoclonal antibodies. Additionally, this diverse range facilitates the production of antibodies that cross-react with rodent and human antigens, thus rabbit-derived antibodies are ideally suited for studying human tumor xenografts and for mouse models of human diseases.

6) Complementarity-determining regions (CDRs) are the segments of the variable region of antibody heavy and light chains where antigen-binding interactions occur. The heavy chains of rabbit monoclonal antibodies have a longer third CDR (CDR H3) compared to other mammals and this region is often found to be the site of the most significant contact with an antigen. This longer CDR H3 is one reason why rabbit monoclonals typically have a 10-100 times higher affinity than mouse monoclonals and continually produce better results in many IHC and WB assays.

Based on the factors listed here, rabbit monoclonal antibodies hold the potential to outperform traditional monoclonal antibodies and provide better, more accurate results with decreased background staining and false positive rates in assays. With the continued demand from researchers for better antibodies and reagents, development and use of this superior alternative will undoubtedly expand in coming years.

The expansion of recombinant technology has unleashed the scientific potential of monoclonal antibodies and brought with it improved antibody consistency, sensitivity, control, specificity and scalability via high-throughput genotype-specialized production.

Recombinant antibodies are monoclonal antibodies, which are generated in vitro from cloned heavy and light chain antibody genes. As long as enough of the genomic sequence is known for the design of primers or hybridization probes, any species of antibody-producing animal can have their antibody genes cloned for recombinant antibody production. High-yield plasmid DNA vectors, transfected into hosts such as bacteria, yeast, or mammalian cell lines, are used to drive the expression of the cloned heavy and light chain genes as separate proteins, which assemble into natural IgG molecules within the hosts. Once screened and isolated the engineered cell lines can be stored for extended periods or utilized to expedite the mass production of monoclonal antibodies.

The development of recombinant antibodies involves the construction of antibody libraries. Libraries vary depending on the source of the cloned heavy and light chain cDNA sequences. These sources are categorized as: naïve, immune, semi-synthetic, or fully synthetic. Naïve and immune libraries represent the animal-derived sequences because they come from directly cloning IgG genes from non-immunized and immunized animals, respectively. Expressing antibodies from immunized animals are versatile, well-established, robust, because they have been subjected to in vivo selection and are more likely to exhibit specific antigen recognition. However, utilizing animal-derived libraries can have some drawbacks, including a more laborious and time-consuming first phase of production with the reliance on animal B cell isolation. In contrast, semi-synthetic and fully synthetic libraries derive their IgG sequences from known antibody constructs and the introduction of sequence diversity into CDRs.

The combination of monoclonal antibody technology with recombinant DNA and protein expression constructs a direct link between antibody genotype (variable domain genes) and phenotype (resulting antibody construct). However, the true power of recombinant antibody technology is the ability to select and screen for specific characteristics of binding kinetics. High-throughput in vitro display technologies including phage, ribosome, yeast and mammalian display allows for the identification of novel antibodies that can function is endless analytic and clinical applications. Moreover, recombinant antibodies can be manufactured to recognize epitope binding sites that are linear or conformational. Further engineering of lead antibody candidates is often utilized to tweak recombinant antibodies so that they display reduced immunogenicity, have increased binding affinity, half-life or enriched manufacturing and storage capabilities. In contrast to traditional monoclonal hybridoma technology, recombinant antibodies are more amenable to drug or toxin fusions and offer reduced variability, increased affinity and specificity, leading to reliable, reproducible experimental results. This method also reduces the need for multiple animal immunizations and ensures long-term consistency between product lots.

1A) Inoculation of rabbit with specific antigen (peptide or protein)

4B) Antibody expression and purification 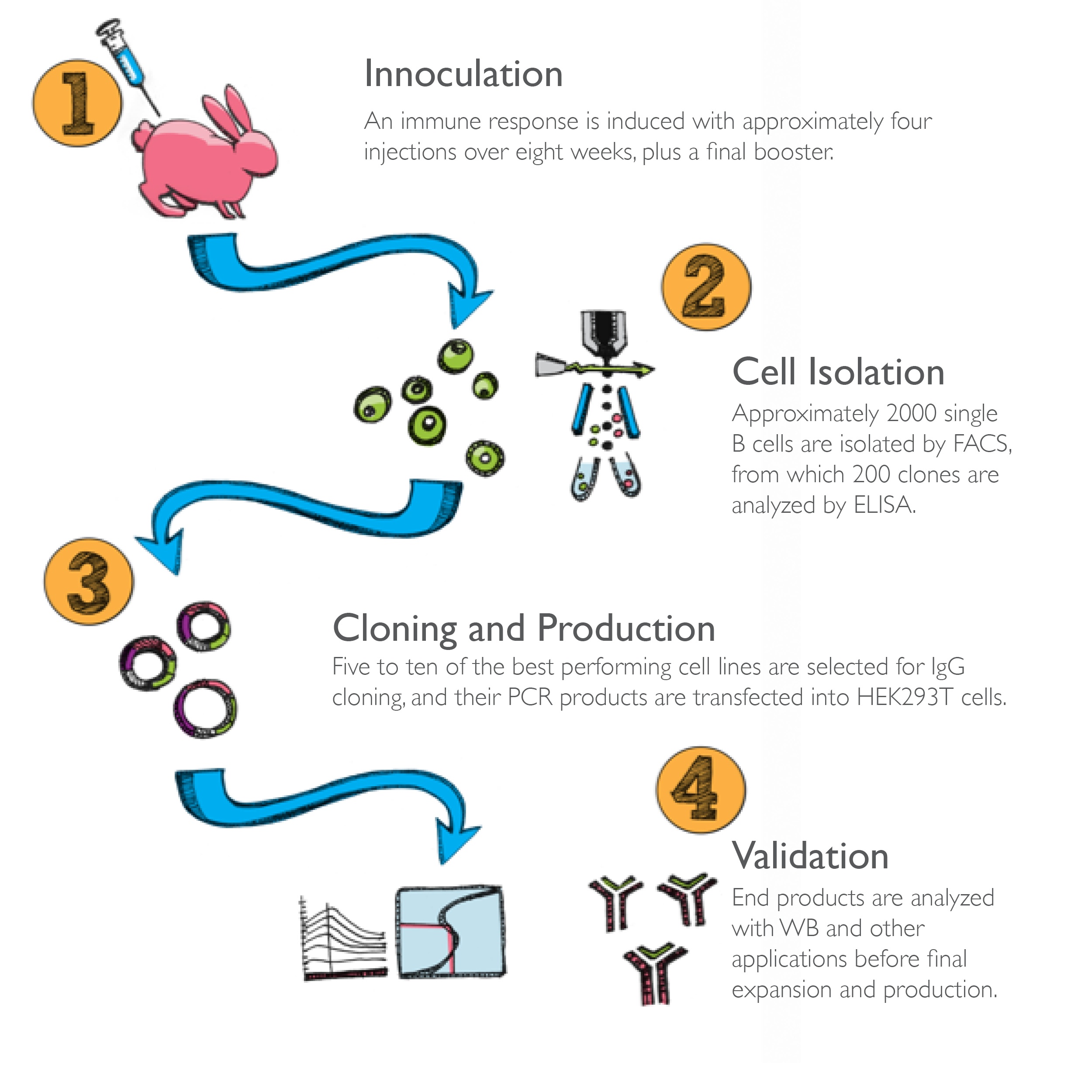