Th (CD4+) cells play a crucial role in the immune response. They are functional to assist the proliferation of B and T cells and their differentiation into effector cells. According to effector functions and cytokine production, Th cells are grouped into Th0, Th1 (resistance against viruses and bacteria), Th2 (resistance to parasites and mucosal infections), and Th17 (resistance to fungal infections).

Th0 cells are also called naïve Th cells, a subset of Th cells that are not fully differentiated yet. After antigen stimulations, Th0 cells will develop into the following subtypes Th1, Th2, and Th17.

The primary cytokines secreted by Th1 cells are IL-2, IFN-γ, and TNF-β. IFN-γ activates macrophages, and TNF-β can activate macrophages and natural killer cells. IL-2 can stimulate the proliferation of cytotoxic T lymphocytes (CTL) and NK cells. Th1-type cytokines tend to produce the proinflammatory response and are a perfect group of components in blood and tissues to resist viral and bacterial infections. 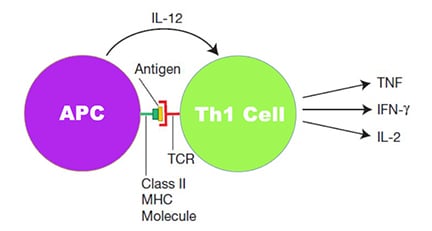 Th2-type cytokines are mainly IL-4, IL-5, and IL-13. Among them, IL-4 is a B-cell growth factor, affecting the antibody class switching that occurs in mature B cells, thereby inducing IgE secretion. IL-5 promotes the secretion of IgA, while IL-13 stimulates the production of intestinal mucus. Therefore, Th2-type cytokines promote the production of large amounts of antibodies against parasites (the antibodies produced are IgE) or mucosal infections (the antibodies produced are IgA).

With the help of TGF-β and IL-6, Th0 cells differentiate into Th17 cells, secreting IL-17 and IL-21. It is known that IL-21 facilitates the proliferation of Th17 cells, and IL-17 is required to recruit neutrophils at the site of inflammation. Although the effector function of Th17 cells has not been intensively studied, the latest studies have revealed its anti-fungal activities. 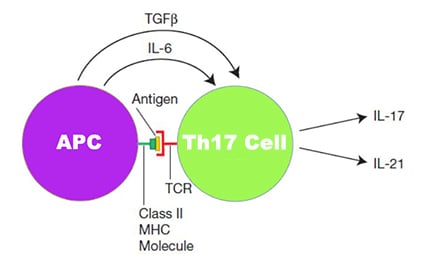 CTLs (CD8+) are the primary effector cells in response to viral infection and acute transplant rejection. CTLs can kill and lyse virus-infected cells or cells transplanted from heterologous tissues. The immune response of CTLs has the following features:

Regulatory T cells (Tregs) are a specialized subpopulation of T cells that act to suppress the immune response, thereby maintaining homeostasis and self-tolerance. As the classification of Tregs is relatively complex, we mainly discuss iTregs (inducible regulatory T Cells) in the peripheral system.

Naïve Th cells can not only differentiate into Th1, Th2, and Th17 but be easily induced (inducible) into Tregs in the presence of a large amount of TGF-β. Unlike common CD4+ helper T cell-secreted cytokines such as TNF and IFN-γ, iTregs secrete IL-10 and TGF-β that suppress immune responses. The normal effector function of Tregs is to block the T cell-mediated immune response, which plays a critical role in establishing immune tolerance and preventing autoimmunity. For example, once the FOXP3 gene of the cell cannot perform its proper function due to mutation, the fetus will suffer from autoimmune disease. 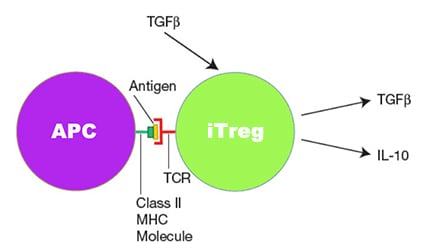 To date, numerous studies on the inhibitory effect of Tregs have revealed its extensive impact on the immune response of T cells, ranging from downregulating APCs function and inhibiting costimulatory signals to directly inhibiting the proliferation of T cells.

Memory T cells are antigen-experienced cells that mediate a faster and more potent response upon repeat encounter with antigen. These cells are long-lived, and when developed, even if exposed to the specific antigen several years later, they produce a rapid and robust specific immune response. Memory T cells can be CD4+ or CD8+, and the unique marker on the cell membrane surface is CD45RO.

δγ T cells do not express CD4 or CD8, so they are also called double-negative (DN) T cells or CD3+CD4-CD8-/TCR type. DN T cells constitute a rare subset of peripheral T cells (~ 5%), but their roles in immune response have drawn much attention. DN T cells primarily exist in organs and tissues that are directly exposed to the external environment, such as the respiratory tract, the gastrointestinal tract, and the genitourinary tract, indicating that they may play a critical role in resisting the damage caused by external environmental factors.

NKTs are a subset of T cells with specific membrane markers in immune cells, which are different from classical T/ B lymphocytes and NK cells, and are highly conserved in mice and humans. NKTs express T-cell surface markers, such as CD3, TCRαβ, and NK cell surface receptors, such as NK1.1, CD16, CD56, etc.; these surface markers are characteristic of adaptive immunity and innate immunity, respectively. NKTs recognize glycolipid antigens presented with CD1d and are activated to produce a large number of Th1 and Th2 cytokines rapidly. These cytokines directly or indirectly participate in the immune response, mainly innate immunity.