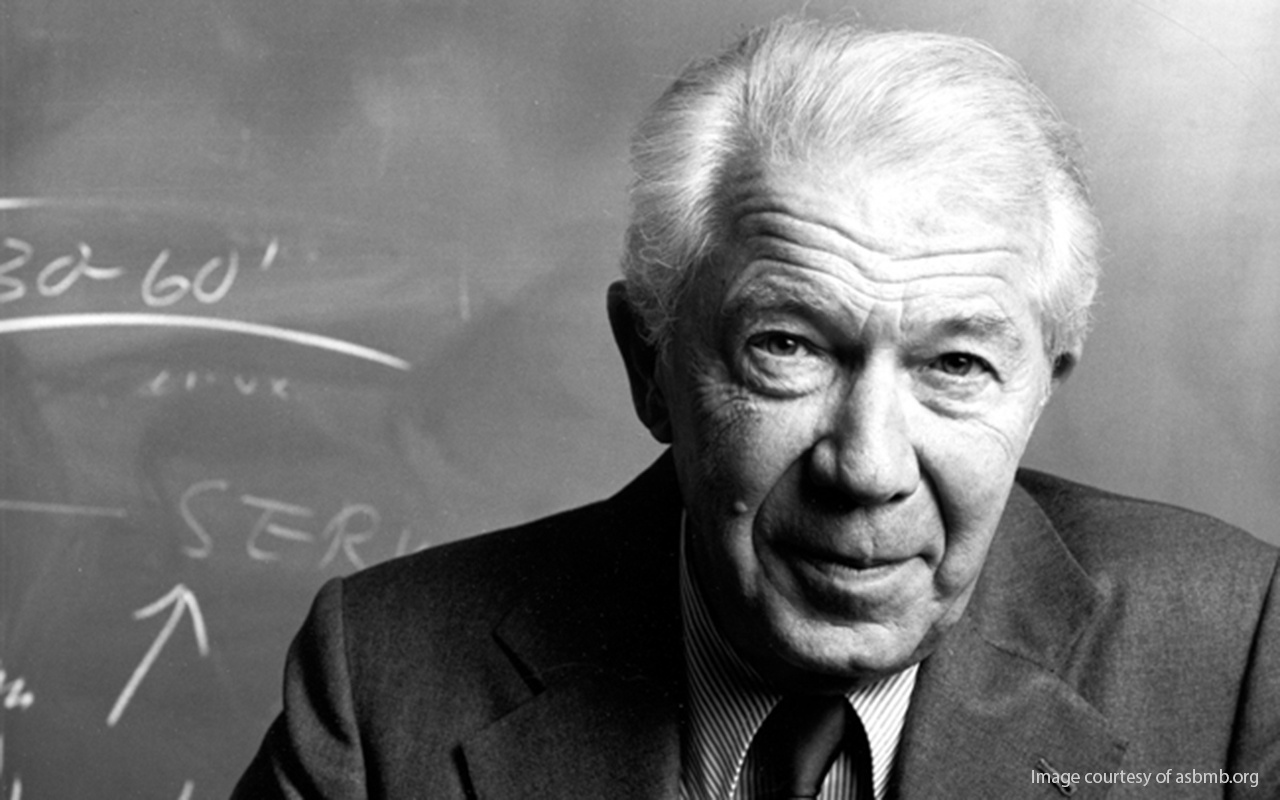 Belgian cytologist and biochemist Christian de Duve discovered lysosomes (the digestive organelles of the cell) and peroxisomes (organelles that are the site of metabolic processes involving hydrogen peroxide). In 1974, de Duve shared the Nobel Prize in Physiology or Medicine with Albert Claude and George E. Palade “for their discoveries concerning the structural and functional organization of the cell.” He coined the term “autophagy” during a conference along with endocytosis and exocytosis. De Duve was led to work on the topic because it combined two of his major interests, glucagon and lysosomes.

Born in England in 1917, Dr. de Duve was raised in Antwerp, Belgium. He earned his medical degree from the Catholic University of Leuven in 1941, following a brief period as a medical officer in the Belgium army in southern France during which he was captured by the Germans and subsequently escaped. He furthered his education in biochemistry at the Medical Nobel Institute in Stockholm.

As he continued his primary research focus, the role of glucagon and insulin, Dr. de Duve noticed that the activity of the liver enzyme glucose-6-phosphatase was mostly associated with a sedimentable cell fraction called microsomes, which mainly contained vesicles of the endoplasmic reticulum. Dr. de Duve and his collaborators reached the conclusion that acid phosphatase and other hydrolases with an acid pH optimum were enclosed in a new organelle, which they proposed to call “lysosome.”

A few years later he discovered a second organelle, which was characterized by the marker enzyme catalase and was loaded mostly with enzymes involved in a dangerous form of oxidation, releasing toxic peroxides, explaining why such reactions should be enclosed within a separate membrane-bound compartment. For this organelle de Duve coined the name peroxisome.

In his Nobel Prize acceptance speech in 1974, Dr. de Duve recollected his time spent in Stockholm after the war, including an encounter in his lab during the long Swedish winter:

I saw an extraordinary apparition: an unbelievably beautiful girl, in a ghostly white gown, with long golden hair, and on her head a crown of glowing candles. Her name was Brita and I saw her everyday. But that night she was Lucia, a magician and a goddess. And she told me the importance of light: The light of knowledge, the light of peace, the light of freedom, the light of love and of mutual understanding.

In 1974, Dr. de Duve founded the International Institute of Cellular and Molecular Pathology, now known as the de Duve Institute, in Brussels. He became emeritus professor at Leuven in 1985 and at Rockefeller in 1988.

Dr. de Duve is the author of more than a dozen books in English and in French, including A Guided Tour of the Living Cell; Blueprint for a Cell: the Nature and Origin of Life; Vital Dust: Life as a Cosmic Imperative; Life Evolving: Molecules, Mind, and Meaning; and Singularities: Landmarks on the Pathways of Life.

Photograph courtesy of The Rockefeller University

Dr. de Duve's achievements helped pave the way in medicine and science. To view related products, follow the banner below: