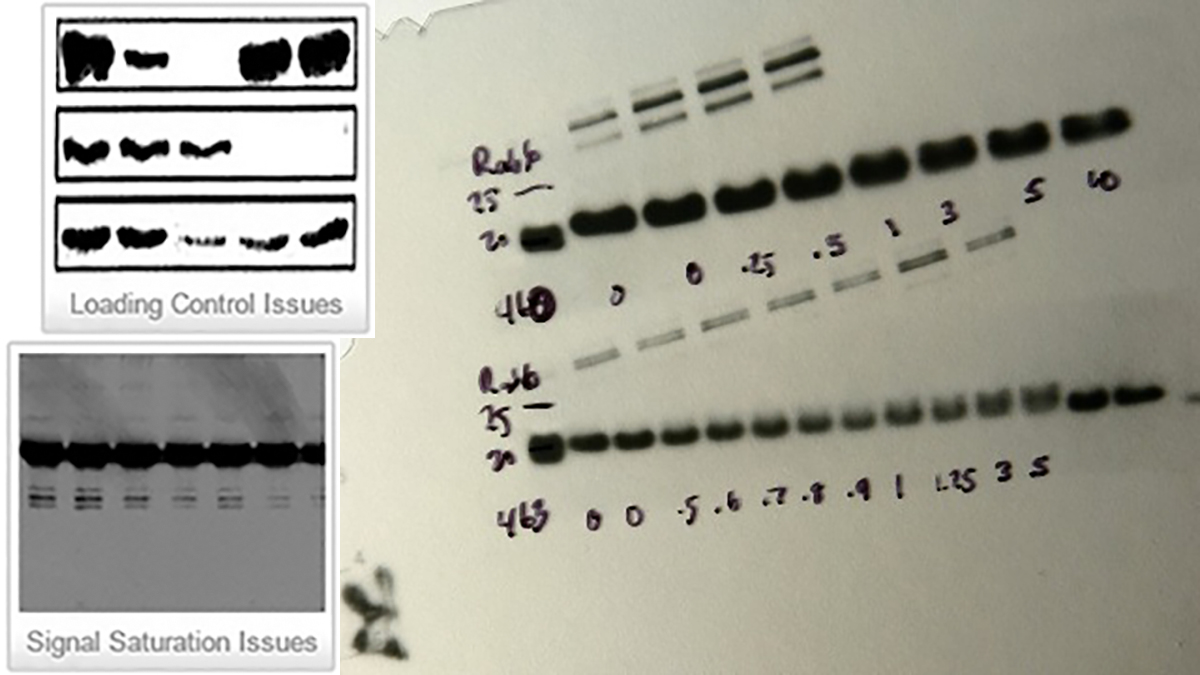 A wide variety of proteins are being studied. To help select loading controls, commonly used loading controls for proteins from the cytoplasm, mitochondria, and nucleus are discussed below.

Both alpha and beta actins have been used as loading controls in Western blot assays. However, before selecting an actin protein as your loading control, you should ensure that it is an appropriate control with very little to no variation among your treatment groups. Changes in cell growth conditions do disrupt actin protein synthesis. Moreover,

given that actin proteins tend to be present in cells at very high concentrations, it is essential to ensure its dynamic detection range, avoiding signal saturation and variation in actin protein levels.

GAPDH is an RNA-binding housekeeping protein and highly conserved across species. Notably, a comprehensive study indicates that GAPDH mRNA levels differ significantly among tissue types but remain constant with regards to age and gender. Thus, it is a useful loading control in analyses using the same kind of tissues. In other cases, like analyses between two different types of tissues, GAPDH is not a reliable control.

Five types of tubulin (alpha, beta, gamma, delta, and epsilon) are present and highly conserved across species. Among them, alpha-, beta-, and gamma-tubulins have been used as loading controls. As tubulins are extensively involved in cell proliferation, many chemicals can affect tubulin expression in vivo.

Vinculin is another cytoskeletal protein used as a Western blot loading control. It is one of the major components of cell-cell and cell-matrix junctions. Due to its a large size, vinculins are used as a loading control for high molecular weight proteins.

Lamin proteins are the structural components of the nuclear lamina, which support the nuclear envelope and is involved in the breakdown and re-formation of the nuclear envelope during the cell cycle. In animal cells, three genes encode at least seven lamins in three types. A-type lamins are expressed after gastrulation, and the expression of C-type lamins is tissue-specific, while B-type lamins are present in every cell. Among the lamins, Lamin B1 is conserved across species and commonly used as a loading control for nuclear protein studies. Of note, Lamin B1 protein is not suitable as a loading control for samples without a nuclear envelope.

TATA boxes are present in 10-20% of human gene promoters. TBP is a highly conserved general transcription factor that specifically binds to the TATA box DNA sequence before gene transcription by RNA polymerase II. Post-translational modifications may cause small variations in the molecular weight of TBP on Western blots.

PCNA is involved in eukaryotic DNA replication. It is a cofactor of DNA polymerase delta and is expressed in the nuclei of cells during the S phase of the cell cycle. PCNA is highly conserved among species ranging from yeast to primates. However, because the function of PCNA is in DNA replication, it is a poor loading control for non-proliferating cells or cells with anti-proliferation treatment.

Voltage-dependent anion channels (VDCAs), a class of porin family proteins, constitute the major proteins of the outer mitochondrial membrane in eukaryotic cells. Among three members (VDAC1, VDAC2, and VDAC3) in vertebrates, VDAC1 is conserved in many species and present in the outer mitochondrial membrane. It is expressed in the heart, liver, and muscle tissues. Multiple variants of VDAC1 exist due to alternative splicing.

Cytochrome C oxidase, in the inner mitochondrial membrane, is the last enzyme complex of the mitochondrial electron transport chain. The complex consists of 13 subunits encoded by both mitochondrial and nuclear genes. Subunit IV of cytochrome C oxidase has two isoforms (isoforms 1 and 2), which are encoded by two nuclear genes (COX4I1 and COX4I2). Isoform 1 is ubiquitously expressed, and isoform 2 is highly expressed in lung tissues. Isoform I COX4I1 is frequently used as a loading control.