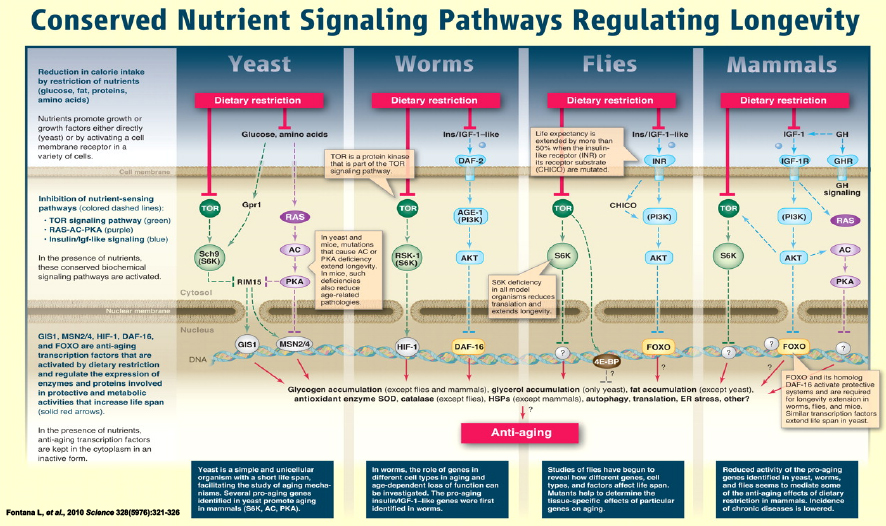 Research into the processes of aging carries unique challenges. Although we have a distinct interest in understanding human aging, our long lifespan makes the experimental design largely impractical. Ethical questions also arise in human studies. Therefore, scientists have to turn to animal models and developed the simple but powerful invertebrate model organisms, Caenorhabditis elegans and Drosophila melanogaster.

Caenorhabditis elegans is a roundworm with a 20-day lifespan, making it a good subject for lifespan studies. More than 400 genes that extend lifespan in roundworms have been described. Some of them seem to confer increased longevity by supporting resistance to external stresses, such as bacterial infections, high temperatures, radiation, and oxidative damage. Some other genes play a crucial role in regulating the function of mitochondria, which is a cellular organ (organelles) to produce energy. The correlation between the existence of roundworm genes and their mammalian counterparts suggests that the roundworm will continue to be a valuable animal model for the study of aging.

In addition to the genetic studies, investigators also intend to develop the anti-aging treatment by utilizing C. elegans. For instance, worms that carry large amounts of DAF-16 in their nuclei cause the worms to live longer. Although the explanation for this phenomenon is still incomplete, it does offer an opportunity to screen drugs to see if they increase the nuclear levels of DAF-16. If certain drugs can increase the amount of nuclear DAF-16, they might be beneficial in increasing lifespan.

Drosophila melanogaster, or the fruit fly, is a favorite subject for studies on longevity. Researchers have identified one gene that they have named Methuselah, which can increase fruit fly life span by 35 percent. Molecular physiologist Xin-Yun Huang of Cornell University’s Weill Medical College in New York City has researched to uncover what activates the Methuselah protein. Huang and his team found that another protein, the Sun protein, binds to Methuselah and alters fly longevity. Flies with a disabled copy of the Sun gene lived 50 percent longer than control flies.

A number of studies on a fruit fly gene called Indy (for “I’m Not Dead Yet”) have been published. Various mutations in that gene result in a doubling of the average lifespan without losing fertility or physical activity. Loss of the mutation returns the lifespan to a normal length. The protein that the Indy gene produces is closely related to a human protein active in energy production. Because the fruit fly has genes such as Indy that produce proteins very much like human proteins, it makes an excellent animal model for aging research.