An Unexpected Candidate in the Search for Liver Cancer Therapies

Hepatocellular carcinoma (HCC) — the most common primary liver cancer in adults — currently has poor prognosis in most patients. Previous research has shown that, by activating or silencing specific genes, researchers can gain insights into the genetic underpinnings of the disease. However, many of these findings have raised more questions than answers, with counterintuitive results coming from several knockout studies.

A closer examination of one experimental system has revealed a surprising finding that explains these discrepancies: A chemical compound known as pIC, which is used to induce gene expression, actually inhibits some tumors by itself.

Experiments conducted by Jin Lee et al. (2017) at the University of San Diego using two different animal models of liver cancer and previously documented gene deletion methods found that administration of pIC alone — independent of its targeted use — can result in significant anti-tumor effects. Even more remarkably, the effects last for eight months after injection, making the compound a promising new compound for the fight against this disease.

"We were initially performing gene deletion to investigate how different types of cells communicate in the liver to promote or suppress cancer development when we found that this synthetic double-stranded RNA prevented liver cancer from initiating by harnessing the body's innate immune system," said Gen-Sheng Feng, Ph.D., in a press release.

pIC, or polyinosinic-polycytidylic acid, is a synthetic double-stranded RNA molecule that affects the innate immune system — the cellular defense system that allows an organism to recognize and eliminate threats to the body. In this study, the authors suggest that pIC reprograms immune cells such as macrophages and natural killer cells, which subsequently prevents tumors from forming in their animal models. 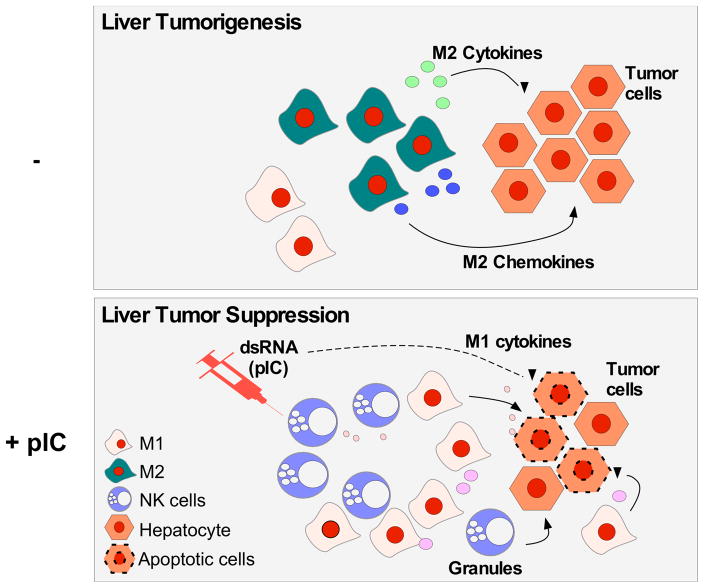 The researchers divided mouse models of HCC into two subgroups. One subgroup was treated with a chemical called diethylnitrosamine (DEN), which is known to aggravate tumor growth in their particular genetic model. The other subgroup treated with DEN and pIC at different time points. Additionally, the researchers tested several alternative genetic systems known to induce models of the disease.

At eight months, analysis of each group revealed that the mice injected with pIC, independent of the genotype in question, had a significant reduction in tumor size and numbers. The best results were observed when injections were given before the administration of the carcinogenic DEN, opening the door for potential development of an HCC vaccine to prevent tumors from ever appearing.

By doing a similar analysis in mice with alterations to the PTEN gene in their livers, the researchers discovered that specific gene sets were being affected by pIC. Through subsequent analysis of the different genetic models, they were able to identify a multitude of pathways initiated by pIC, thus revealing that innate immune mechanisms were working to inhibit tumor formation.

By examining multiple animal models and deleting specific genes that play a known roll in the development of liver cancer, these researchers used precise controls in their analysis of pIC’s previously unreported effects. The study reveals an essential role of pIC at early stages of liver cancer development and treatment. Furthermore, even eight months after administration, the researchers could still observe significant effects of the pIC on tumor growth. Future investigation into the dosage and scheduling of pIC could reveal an even more remarkable tumor-inhibitory impact in liver cancer.