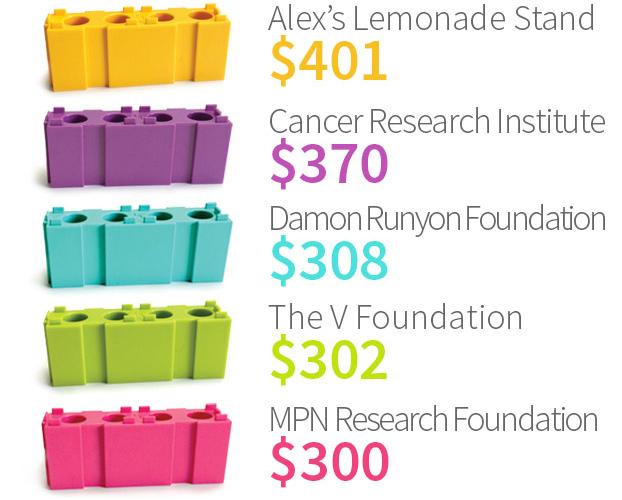 What an exciting AACR 2016! Bioss Antibodies™ entered this conference with a goal to donate money to cancer research. After choosing a variety of fantastic organizations, we set out to get support and feedback from all the attendees of the show. For each visitor, we decided to donate one dollar to a cancer research foundation of their choice, based on the five we put on the short list. The attendees choice was represented by a colored brick that corresponded with the foundation. As The Bioss Brick™ began to stack visitors soon realized that there was a method to the madness - and that the bricks would create the shape of a ribbon, built one by one as each visitor colorfully expressed their opinion! As you can see, the participation was overwhelming and we have all of you to thank!

Check out the progress of our donation ribbon as each day came to a close. In the beginning the colors varied pretty evenly. However, as the days drew on and word spread there was a noticeable shift. While all the foundations we selected received recognition, Alex's Lemonade Stand and the Cancer Research Institute drew the most support. In fact, we ran out of purple bricks for the Cancer Research Institute, while the yellow bricks of Alex's Lemonade stand soon clearly stand out across the entire ribbon. We are so thrilled that everybody stopped and we look forward to seeing you again next year. Thank You New Orleans and AACR - this was a colorful event as always! We had a blast and IgGy™ was very excited to go home with so many new friends. See you soon! ~ The Bioss Team